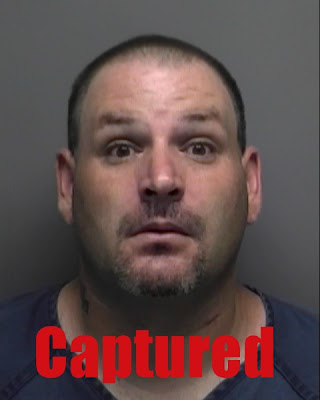 After many hours and few leads, the St. John's County Sheriffs office announced an arrest. We are posting the personal testimony of one of his victims:
Jeremy Rose is a scam artist. I met Jerry just over a month ago in St. Augustine, FL. He presented himself to me and everyone else in St. Augustine as being from Ireland and spoke with a thick Irish accent. He suckered us all with tales of his time in the Irish Special Forces and of his many tours of duty. He sat on my couch and cried as he told me about how he got the large scar on the right side of his body while in Kabul, saving a child from a bombed building. He cried about the fellow service men he had lost and about all the death and destruction he had seen there. He told elaborate stories of his boyhood in Ireland, of how close he is to his mother, of how he loves to dote on and spoil his daughter, Lucy. He lived in my house with me as this man for almost 3 weeks, as this gentle, kind, generous, noble, sensitive, caring bear of a man. Unfortunately, not one bit of it is true.

Jeremy is really from Auburn, NY. He is american born and bred and his real speaking voice has no accent at all. He is not even of Irish descent. He has met his daughter Lucy only once and has never contributed a dollar toward her support. He has been in and out of jail for scheming to defraud and organized fraud charges over the last 18 years. He has stolen from his mother, his father, and his sisters Amy and Kate many, many times. When I first met him but prior to him staying with me, he stole the rent money from a man that had opened his apartment to Jeremy by telling him he was going to get a cashiers check for two months rent and pay the landlord. The roomate gave him his share of the rent money and the landlord was never paid. This man has been thrown out of his apartment as a result of his trying to help Jeremy out. Jeremy spent a great deal of time and energy getting me to trust him and to believe how much he said he cared about me. And I was starting to have real feelings for the man in front of me. Jeremy did steal some money from me while he was staying here, I am a waitress and always have cash on hand. But what he took from me is far worse than the money I am missing. He had me falling for a character that doesn’t even exist. Unless you have been through something similar I don’t know that you can understand how devastating this is, to have been scammed not for you money, not for someone’s survival, but for your emotions, because they get a rush from it. The whole time he was staying with me as an Irishman, he was calling old friends in Auburn from my phone at night when I was at work, telling them he had really straightened his life out, really learned his lesson and that he had gotten his act together. More lies.

And I wish I could say that this was an isolated incident. Sadly, no. A few days ago, I connected with a woman from Charleston, SC that he did the exact same thing to TWO MONTHS AGO. That means that only days after she kicked him out of her life for being a scam artist, he came to St. Augustine and started it all over. While scamming her, he also scammed a friend of hers, an 86 year old veteran, out of almost $5000. She and I have talked extensively, and he told us both all the exact same things: about his background, about his daughter, about how much he loved us and had not felt this way in years...he used all the exact same phrasing, all the exact same ploys to get us to trust him. I am sure that she wasn’t his first time doing this and I am sure that I won’t be the last.

In looking into Jeremy's past I have found an endless number of victims. While in Charleston, he stole the ATM card of an 86 year old veteran on a fixed income who had taken Jeremy in because he believed he was a veteran too. Jeremy went though his papers when he was asleep at night and found his pin number. In two days, he withdrew $1000 from this man's bank acct. He has stolen from a priest in North Carolina. He steals from men and women, young and old, from everyone he comes in contact with.

Other favorites stories of his are claiming to be a musician from Nashville or Memphis (talks with a southern accent for this one) and working on his recording career. He does play guitar, write music, and play the piano quite well, but chooses to scam people for money instead of using his musical talent to make money. He also may claim to have family connections to the Italian mafia/mob, have an uncle who owns pizza places in new york city. He almost always claims to be living off a family trust fund, and will pretend to transfer money from his bank acct. to yours, always with a good excuse why the money never shows up...in the meantime, you are paying for everything or even loaning him money based on the promise of these funds. He carries credit cards with him, but they are either not activated or pre-pay with no money on the balance. But he will pretend to pay your bills for you, on the phone in front of you, with these credit cards...if you call the company back you will find your bill unpaid. No matter what he claims, Jeremy is broke and penniless except for the money he steals.

Jerry Rose may attempt to go by another name. He has several identifying tattoos: one on his neck that says Romans 2:14, one on his forearm that says "Lucy" and one on his shoulder/upper arm that says Choir Boy and has a picture of a devil holding a microphone.

After being scammed by Jeremy "Jerry" Rose, many victims are ashamed and embarrassed and so don't file charges or even contact the police. Jeremy is a clever and accomplished scammer with years and years of experience. There is nothing to be ashamed about. But Jeremy is banking on your silence, which allows him to get away with it. If you know Jeremy Rose or he is in your life right now, do not attempt to confront him. He will just spin more lies. Most likely he will start an argument and find a way to blame or guilt you for the whole situation. Just call the police. Report any stolen money, property, etc. immediately. If nothing else, file a police report. If Jeremy Rose is talking, Jeremy Rose is lying. The only time he is not stealing from or scamming people is when he is in jail.

Jeremy was released from jail in October of 2009. He was last reported to be in the New Port Richey area at Christmas, 2009. He is still trying to scam people. Please be aware and spread the word.

TO ALL PLEASE BE AWARE: JEREMY ROSE IS NOW IN THE NEW PORT RICHEY AREA WITH THAT PHONEY IRISH ACCENT.
DON'T LET YOUR GUARD DOWN WITH HIS STORIES AND PHONEY TEARS.

Jeremy Rose has passer away. Out of respect for his family, please remove this post.
A friend of the family in NY.

He won't be bothering anyone anymore, I found out last night that he's dead. I didn't get any details other than it may have been suicide.

Jeremy Rose is no longer a threat to scam anybody. He was fond dead in probably his next victims home. That would be the 21st of January. I met him at a neighbors house on New Years Eve. He accompanied the female next door to me. Yes he did tell his whole story, the same as was written in the article. He took her vehicle to go out the Thursday evening, supposedly met some young lady at a bar and went back to her place. We don't know what he died of, drug, alcohol, or whatever, but he is gone...

Thought you would like to know that Jeremy Rose is now dead!! He was trying to scam his way into another ladies life and died of a heart attack.

Jerry pulled the same story as the lady before my story of Jeremy rose, after he met and ask this lady across the st from my wife and I.She ask my wife if she could bring her new Irish friend to our 2010 new years party at our home,she said yes.
Well Jerry was the life of the party.Telling of his mate in the army in Iraq, had carried Jerry 5 miles through the desert bleeding to death.and saved his life.For 3 weeks,we all were having a good time.Then he didn't come,our Pasco county sheriff's deputy came to say he died This morning Jan,22 2010. We were so up set about his death He died from pills and a Qt of scotch.5 days later the sheriff's dept, told us about his life of scamming women and moving on 3-4 weeks,to next mark.The hard part, the lady lost 1500.00$ and he,had spent 4-5 days planning to take a lot of money from an old senile retired navy man,my neighbor.He died before taking money from the old man.The sheriff didn't say if his family has claimed his body, Boy Hollywood could make a fortune from a movie about this con man. Paul Mapes Hudson Florida.

Im from Auburn NY and new Jeremy way back in 92.I met him through a friend.I guess I new he was a bit off.I wanted to let you know I got word today that he died some time in the past week or so.Its a bit sad that he ended up to be such a waste.

Jeremy Rose passed away on January 21st. Thought this would bring comfort to some people.

Jeremy OD'd on drugs he stole from his last victim and died on January 22nd in New Port Richey, FL.

Jeremy died at the end of 2009. He will no longer be scamming anyone. It is a shame he hurt so many people, but now he is answering to a higher power.

I'm a friend of the family. It's sad to think that people are so cruel and evil to print stuff like this about a person who has passed. If nothing else, think of his family. Jeremy was a nice person but,an alcoholic. I know some of this may be true -- but assure you all of it is not. May he rest in peace.

P.S. He did not die of an overdose, final results are pending. You people are all gossips!

I dont know if he is really gone.. There is no obituary in any paper anywhere...And when I searched for any info on it, the obituary I did find, in Florida, was not the same Jeremy Rose..there was a picture of this guy, was not "our" Jeremy, the family history didnt even match. I grew up with Jeremy, and I know his family, and I now reside in Fla. This is not the same person....Has anyone in NY seen an obituary, heard from his family? I really think he is still with us, hiding out somewhere taking advantage of everyone thinking he is dead...just my thoughts till Im proven wrong...

He has passed away...on the 22nd of January