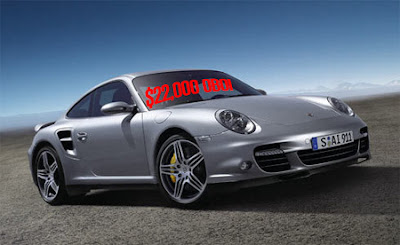 It used to be that kids did the darndest things. Lately, a lot of kids seem to be more into wacked-out-WTF things, like a 17-year-old Manhattan high-schooler in Long Island, NY who was the ringleader in a scam created to rob folks looking to buy a Porsche.

The scam was quite simple and took advantage of folks looking for the too-good-to-be-true. The ringleader would post an ad on craigslist for a used Porsche -- in one case for a 2002 Porsche Turbo for $50,000 OBO, in another case it was for a 2005 Carrera GT that the "owner" had simply "gotten too old for." The siren-goes-off part of the ads was when the owner requested that potential buyers bring $22,000 for the down payment on the car.
Turns out that folks did show up with cash in their pockets. Upon arrival, they were set upon by six male teens who tried to rob them of whatever they had. The most the teen crooks were able to get at one time was $4,000 from one couple. On another occasion, two gentlemen apparently did show up with $22,000, but only lost $50 before they were able to get away. The perps have all been caught, but next time you see an ad for a car that seems like a steal, ask a lot of questions and leave the $22,000 at home.
Posted by CL Scam Buster at 10:54 AM

that's freaky.. that could easily happen with a small ticket item too. That's why I'm always so cautious when buying something from CL, you never know, they know you are coming with cash, and someone could just give you a fake address, and you may feel safe thinking you know where they live, so it should be okay, and you get there at the specified time, and they rob you coming out of the car or something.